As an Amazon Associate, I earn from qualifying purchases.

Avrel Seale set out on a quest to cover a one hundred mile trek through one of America’s hottest bigfoot-sighting areas – Sam Houston National Forest in East Texas – in the hope of encountering Bigfoot.

I am curious and have seen signs of Sasquatch myself that shift the issue from myth to reality. Referring here to Board Camp Crystal Mine. Link is to a previous blog post and interview.

Two nights into his story of the trip and the apprehension is there [me, settled in and comfy, reading his story on my laptop]. Just that initial report made me more than happy that Avrel was doing the leg work. I could understand if he had seriously considered punting the whole thing at that point. 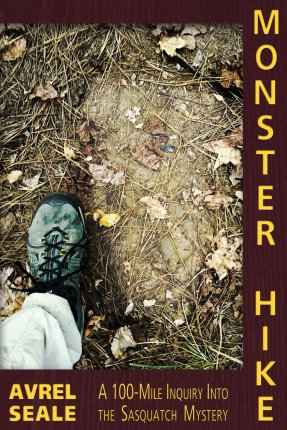 Did he find Bigfoot/Sasquatch?

If the book cover is evidence, he found something.  That’s an 18 inch footprint beside Avrel’s size 10 and a half shoe.

Do they have the ability to erase or block knowledge of their presence and their source?Study their cameo appearances at places like Skinwalker Ranch.

Jocelyn Buckner, a long time tour guide at the Bradshaw Ranch in Sedona, says their resident Bigfoot/Sasquatch is named Big Girl. Our interview is here: Link.

I am looking forward to talking with [6/2/19] Tom Dongo, Sedona resident and author of Merging Dimensions, to learn more about the history of Sedona’s Bradshaw Ranch.

Read Monster Hike. Here’s a bonus from the blog. Avrel goes back out for another look. In that camp scene again, he notices a few more anomalies. What’s with the abandoned tents? No mention of black panthers. Apparently, Texas has those too. Texas Cryptid Hunter

We live in a curious world. Mystery is one of the perks.